When modern audio technology is installed into a 650 year old timber building, it might be fairly assumed that in order to achieve a successful sonic outcome, some degree of aesthetic compromise is inevitable. When POLAR, in conjunction with installers Saville Audio Visual, was approached to provide a new speech and background music system for just such a building, the brief did not allow for such luxury.

Construction of The Merchant Adventurers' Hall in historic York began in 1357 and today, over 650 years later, it is still in use as a fully functioning venue and meeting place. As one of the finest surviving medieval guild halls in the world, the facility is Grade 1 listed and is the largest timber- framed building in the UK still being used for its original purpose. Naturally, English Heritage were adamant that the fabric and appearance of one of England's finest medieval buildings should remain as undisturbed as possible. 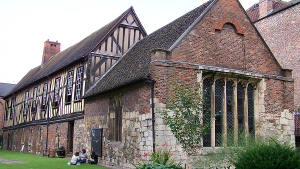 Naturally, English Heritage were adamant that the fabric and appearance of one of England's finest medieval buildings should remain as undisturbed as possible. 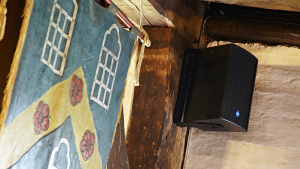 The installation was to cover two separate rooms, having the capacity to operate independently in each, or across the venue as a whole. The interior of the entire building comprises a timber framework of pillars and beams, wooden floors and very little in the way of soft furnishings or surfaces. Three systems were installed across the two rooms to best serve the requirements of the brief. The large room was equipped with a speech and background music system as well as a conferencing system, whilst the small room had its own speech-only system. Audio from each of these systems could be fed across all or part of the venue to retain maximum flexibility. 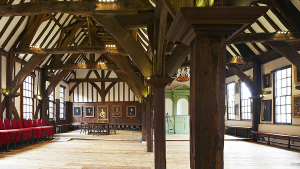 Central to achieving the aims set out in the brief was to replace the main room's 16 existing speakers by utilising 2 colour-matched Renkus Heinz ICONYX IC 16 speakers. These architecturally transparent speakers are designed to be heard but not seen and in this case the two speakers blended almost invisibly on timber pillars. The speaker technology enables sound designers to cover almost any audience area perfectly. Multiple sonic beams can be individually shaped and aimed from a single ICONYX array with great precision. In the main hall this precision was fundamental not only to ensure accurate, natural sound across the required area but also to avoid some of the pitfalls associated with the interior's many hard surfaces and vaulted ceilings. It is no exaggeration to say that far from compromising the visual aesthetic of this most atmospheric of spaces, the installation constituted a net improvement on what had existed before, as well as improving, beyond all measure, the quality of the sound on offer. 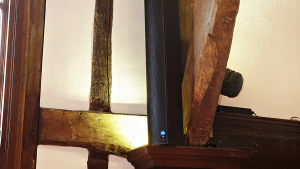 At the heart of the system(s) is the Biamp Nexia CS and SP DSP Processors, alongside the Renkus Heinz ICONYX IC16s, as well as Mc2 T4-250 amplifier and Renkus Heinz CFX 81 and CFX 61 speakers situated in the smaller room. 2 x Biamp Red 1 controllers are employed to facilitate the required independent source selection and volume control. All the wireless radio microphones for speech and conferencing were from Beyerdynamic. For speech, the system utilises 2 x PEM60 head worn and 2 x SDM960M hand held microphones and for conferencing employs a Beyerdynamic MCS system, comprising 1 x MCS223 Chairman's mic and 16 MCS 221 delegate mics. CD and iPod inputs were installed in the main room, as well as an additional iPod input in the small room. The flexibility required by the hirers of the facility was thus more than comfortably met by the systems put in place. 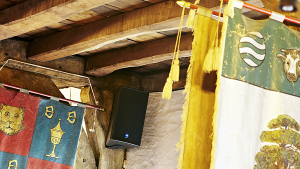 Subscribe to our Newsletter and we'll send you our latest exclusive offers plus amazing savings for all your audio needs. What are you waiting for?

Submitting your details indicates that you have read and agree to our privacy policy and cookie policy. You can unsubscribe from our emails by using the link at the bottom of all emails we send.