The Royal Society of Medicine

The Royal Society of Medicine (RSM) is one of the UK’s leading providers of post-graduate
medical education. Established in 1805 as The Medical and Chirurgical Society of London, by 1910 it had amalgamated with seventeen specialist medical societies and taken up residence in its current Wimpole Street location, under its now familiar name. The Society’s importance to the history of medicine is reflected in the names of some its Honorary Fellows, including Charles Darwin, Louis Pasteur, Edward Jenner and Sigmund Freud. 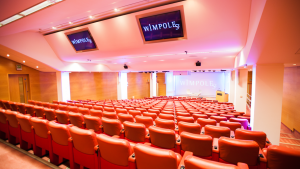 Given that the Society’s purpose is the further education of medical professionals, much of its work revolves around conferences and meetings. High quality AV provision is an essential part of delivering not only the Society’s own activities but also those of other corporate bodies who hire its facilities. External hire accounts for around 40% of activity at the Society’s conferencing rooms, delivering essential revenues that help support its own academic work. Last year the RSM’s technical team made an evaluation of their facilities and concluded that their systems, although all comprising cutting-edge and high quality products, could be deployed much more efficiently. AV manager Kevin McLoughlin contacted the POLAR integrated Solutions Team with a view to advising on and overseeing the complete recommissioning of its existing systems, located in multiple spaces at its 1, Wimpole St facility. 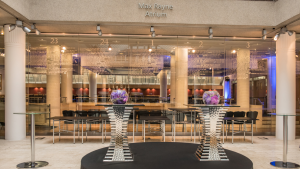 POLAR Integrated Solutions Team was ideally placed to help. More than just a supplier and distributor of products, POLAR possesses all the necessary expertise for working in the field to assist with the design and commissioning of AV schemes on every scale. After the initial contact, POLAR’s Technical Support Manager, Darren Stratford eventually spent two weeks at the RSM’s facilities. He takes up the story:

“The RSM has hosted Tesira hardware for a number of years and in the past we’ve directly supported a number of integrators and the end-user in respect of issues surrounding implementation, configuration and fault finding. At the heart of the matter was the fact that the system’s topology had become challenging, consisting as it did of multiple installations that had added functionality over the course of time. The fluidity of its overall configuration had become clouded by the additional implementations, rendering it hard to follow and difficult to fault find - even when you’re used to supporting Tesira every day of the week! As more functionality was appended, so the difficulty of obtaining information necessary to rectify problems, increased. We discussed how best to overcome the issues with Kevin and Electrosonic, one of the RSM’s integrators and it became clear that the system required a complete overhaul in respect of its configuration and topology". 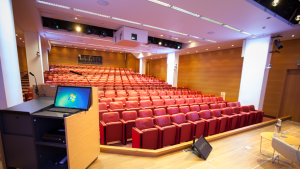 At the time the RSM was incorporating a new multi-purpose function space, The Max Rayne Atrium, into its facilities, prompting agreement amongst the parties that this was the right moment for a root and branch re-design of the entire system. Stratford continues:

“The scope of works that fell under POLAR’s responsibility was to provide an AVB network topology re-design and to reprogram, configure and commission the entire system from scratch. This was a real challenge in that there was no real ‘specification’ or ‘required functionality’ document to work from, as is commonly the case. I determined that the best way forward was to sit down with Kevin and his team who use the system every day and really get an understanding of how they use the system, what functionality they would like to retain from the old configuration and the additional functionality they would like to see”.

Unusually for a project such as this, these conversations took place on site as the system was being set up. Darren Stratford recognised that this was somewhat unconventional but reflecting on the process, feels that the outcomes more than justified the means:

“It was really beneficial to have an open, honest rapport with the end user about what could

realistically be achieved in the timeframe and any inherent limitations that the system may have. The bulk of the programming, re-configuration and commissioning took around two weeks on site, allowing some contingency for wiring/patching issues that were encountered, alongside any time for resolving snags”. 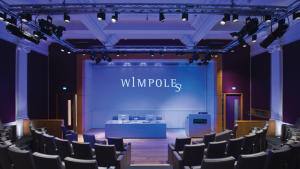 The greatest challenge involved troubleshooting potential networking and patching faults. The AVB network was re-configured from scratch, many of the switches having serious configuration errors within them. Once these were resolved there were problems surrounding what appeared to be LAN uplink traffic being introduced to the AVB network and causing sporadic issues. Working closely with the client was key to resolving the problems as Stratford explains:

“In situations like this it’s always important to understand exactly what is happening on the network at any given time. Dependent on the client, this can sometimes be time consuming without any assistance from network administrators. It’s also a huge potential source for red herrings which can lead you astray. However, working alongside the RSM team I was able to request any specific information we needed and so managed, eventually, to overcome all the issues”. 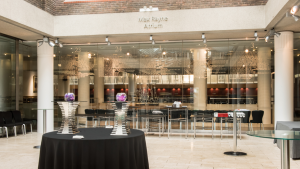 With its configuration following a much more logical structure, RSM now enjoys a fully functional, single complete system, where previously there had effectively been three independently configured systems and networks. Very positive feedback from its users reference the fact that the system is easier to use and control and that any faults arising are easier to trace. The recommissioning of the system at the RSM is the perfect illustration ofhow POLAR’s efforts to form strong relationships with integrators and also significantly, end users, adds a great deal of value to its position as a highly respected distributor.

“The work undertaken by POLAR at the RSM was invaluable. We were able to have a very constructive on-site dialogue with Darren about the issues we were having and supply any feedback he required to progress. We now have a streamlined system that is straightforward to operate and troubleshoot. There is no doubt that the success of this project reflects the value of our relationship as an end user with POLAR’s integrated solutions team - the work was completed in a comparatively short space of time and the level of Darren’s expertise is amply illustrated by the excellent outcome”. 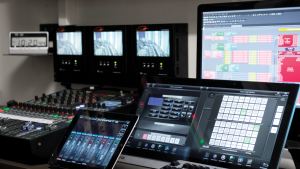 Subscribe to our Newsletter and we'll send you our latest exclusive offers plus amazing savings for all your audio needs. What are you waiting for?

Submitting your details indicates that you have read and agree to our privacy policy and cookie policy. You can unsubscribe from our emails by using the link at the bottom of all emails we send.

We use cookies to personalise content and ads, to provide social media features and to analyse our traffic. We also share information about your use of our site with our social media, advertising and analytics partners who may combine it with other information that you've provided to them or that they've collected from your use of their services. You consent to our cookies if you continue to use our website. Read our cookie policy.

We use cookies to personalise content and ads, to provide social media features and to analyse our traffic. We also share information about your use of our site with our social media, advertising and analytics partners who may combine it with other information that you've provided to them or that they've collected from your use of their services. You consent to our cookies if you continue to use our website. Read our cookie policy.